Shower Parts Names and Their Functionality

Deborah Beams
Research Writer
Deborah is an incredibly talented journalist who's been working for numerous online magazines for over 8 years now. She's also our main research writer who can turn any boring topic into an easy-to-digest text. Loves biking and her two dogs.

Charles Eggleston
Expert Consultant
Charles's been a plumber his entire life. Thanks to his vast experience we can always rely on Charles' expert opinion when creating any of our articles. He's also a fantastic fisherman and cook.

Bathroomer is reader-supported. We may earn a commission through products purchased using links on this page. Learn more about our process here

You can find at least one shower in every house across the developed world. A lot of people shower regularly, whether it is every day, once a week, or they just use the bathtub. However, when something goes wrong in your shower, do you know the shower parts names and what to do to fix it?

The anatomy of a shower is pretty simple, and it makes most issues quite easy to fix if you know what you’re doing. Most showers are fairly standard in how they operate, so this should be the same for almost everyone. They are a common part of our lives, but most people are unaware of exactly how they function.

Here we’ll take a closer look here at the individual components of a shower and also how they work. By the time we’ve finished, you should have solid knowledge of the names of shower parts.

Anatomy of a shower

There is undoubtedly a lot that goes into the shower and making it work. There are a few essential parts that go into every unit, and they work together to make the shower useable. To start with, the shower head is what spits the water out, and you stand under it to shower.

Some shower heads are mostly round, but other shapes can be used. The way shower heads function has changed over the last few decades because of the water conservation laws in the US Trusted Source The US government has proposed changing the definition of a showerhead to allow increased water flow, following complaints from President Donald Trump about his hair routine. www.bbc.co.uk , as there are limits on the amount of water that can be used.

There are a few different types of showerheads you can buy, with dual shower heads being popular due to the greater control you have. If you are looking for a dual shower head, consider the Ana Bath SS5450CBN model.

There are several shower head parts names as the head can include a cap, shower plate, rubber ring, and filter along with other fixtures such as washers and nuts. They all play a role in maintaining shower pressure and maintaining water flow.

Next, we have the hot and cold water pipes that are part of the shower water supply. The water supply provides water to the faucets through the pipes. It is important to periodically look you’re your water supply to ensure that it has not been contaminated with pollutants.

Warm water will come through your water heater. So, if you are not getting any warm or hot water, you will need to look at the water heater first. The cold water is supplied through a condenser or tower. If you do not have any cold water, it could be related to the water cartridge in your shower. In an apartment setting, the water supply will be controlled by individual units in the building, and a home will have a water supply underground.

The pipes are what carry the water up to and through the shower head. They can be made of several different materials, but if you live in an older house, they might be made of galvanized steel. Somewhere within the pipes will be a piece of plumbing equipment called a diverter pipe.

There are many shower faucets parts names such as the cap, cam, ball valve, seats/springs, O-rings, and aerator. They all help to control the temperature and allow for the movement mechanisms inside the shower to work effectively.

You will have to lift the spout that diverts the water to the shower head. The shower also has a cartridge that controls the temperature and water volume. It moves forward and backward; however, you pull the shower handle.

The shower strainer is where it drains. It is essentially a drain cover that you find on the shower floor. Its purpose is to stop anything from going down that may clog the drain up. These are available in many different designs and finishes.

If you do not have a bathtub, you will have a shower base. The shower base is the part of the shower that we stand on. It is pertinent that this doesn’t break, or it will leak and cause the floor to rot. Not catching a leak before it sits too long can cause a lot more damage than warranted and can lead to you needing another professional to come to visit.

The base is one of the shower components that many can take for granted, but it can play an important role in your shower enjoyment and safety. Getting a high-quality shower base will prevent slips while also being comfortable to stand on and fully watertight.

You also may want additional safety features in your shower room, such as grab bars. These can be an essential addition to anyone that struggles with mobility. Some showers might be equipped with grab bars, such as this one offered by Moen, and allow you to shower with greater security.

How does a shower work? 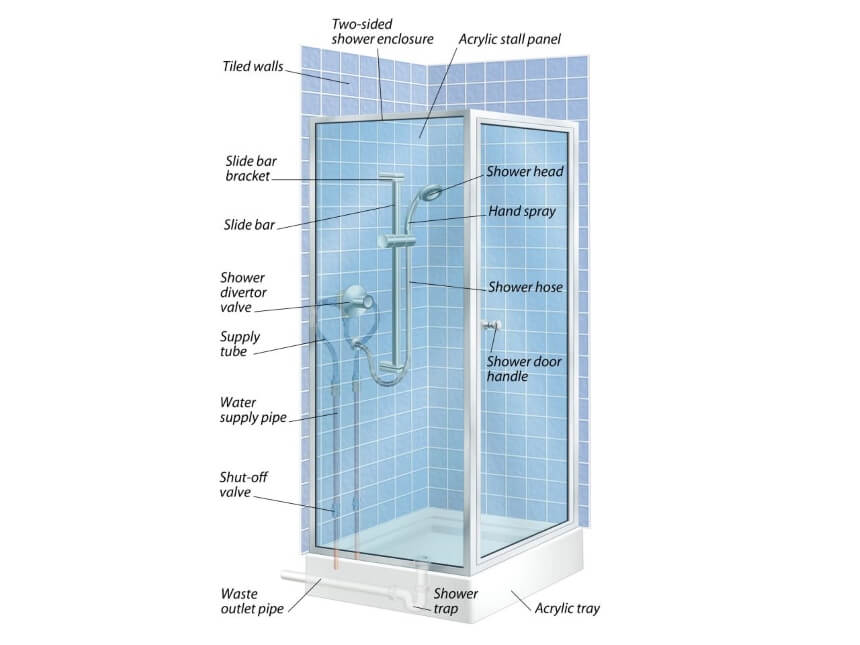 Now that we have gone over the essential parts of the shower that make it usable, it is important to understand how it works as a whole. The entire process starts when you turn the shower valve on.

Depending on where you turn the valve, you will get hot, cold, or warm. The temperature of the water is controlled by the shower cartridge. When you move it so far to the right or left, it closes off one valve to let more come through another. This is how the water can be scorching, freezing, or just right. Once it comes out of the showerhead, it will leave out through the shower drain.

The water will first pass through the strainer that will stop any unwanted pieces of hair or soap from going down the drain and potentially clogging it. The rest of the water will pass through the drain through a P-trap and then disperse into the waste pipes. After it goes into the waste pipes, it will find itself in a septic tank or sewer system.

While most of us use a shower every day, some of us still really are not too familiar with how it works or the shower parts names. While some shower parts are easy to replace, others can be more challenging, and you may need an expert hand.

Knowing the anatomy of a shower allows you to better diagnose problems and also plan ahead if you needed. Plumbing can get complicated, and if you are unsure of what to do, then don’t be afraid to ask for help.

Hopefully, this article has given you a better grasp on shower parts names and how it all works. Pretty much all showers are the same, so this information should hold true whatever type of set-up you have.

1.
The US government has proposed changing the definition of a showerhead to allow increased water flow, following complaints from President Donald Trump about his hair routine.
www.bbc.co.uk